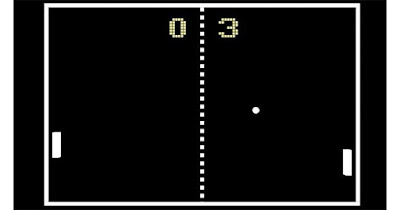 Well OK the header of this article is slightly misleading. I have not been alive since the dawn of videogaming, certainly wasn't around for tennis being played on old oscilloscopes, nor for the many variants of SpaceWar that erupted out of the fevered minds of MIT Students in the US, but I have definitely been around since the very first home videogames caused many a Christmas argument, as we waggled weird dial-like controllers to bat a tiny white dot back and forth on our creaking old black and white television.

I forget which "make" of the home sports videogame console we owned, though I remember it costing an arm and a leg and coming with variants on "Pong" like "Squash" (hit the white dot against a wall) and "Soccer" (control two bats and hit a ball into a goal, quite sophisticated stuff!). Way before the home versions of Pong arrived, I remember playing a stand-up arcade version at Picketts Lock Sports Centre (oh the irony) when we lived in London in the early 1970s, and that's probably really where the proper obsession with arcades and videogames began.

Skip through to nearly the end of the decade and this sucker arrived on the scene... 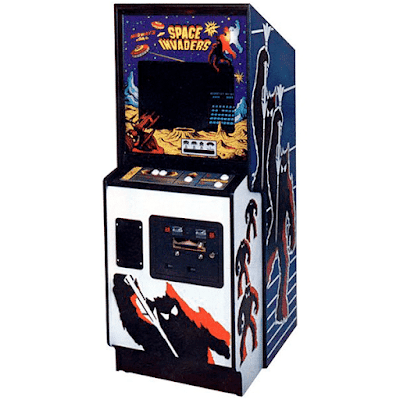 This was where real, dyed in the wool, 'invading your dreams'-type obsession began. Every time I spotted one of these machines and had a spare 10p (yes, that's all it cost to play back then) I'd be at it, trying and failing miserably to clear more than a couple of waves of those pixellated invaders before they chewed through my crumbling defences to land unceremoniously on my ship as it blipped and blooped away. It wasn't so much the game itself, it was the whole experience.

These things cropped up everywhere (and I do mean everywhere, I think the very first one I played was actually a "Cocktail Cabinet" tabletop version in - of all places - a barber shop in Oxford) and were swiftly followed by knockoffs and variants on the same theme. I remember having no "home" means of playing this, and gazing lovingly at the Argos catalogie and the listing for Entex's hand held "Space Invaders" as well as the (retrospectively awful) Grandstand Invader and Invader 1000 versions. We didn't have enough money to splurge on an Atari 2600 but I remember spending rather a lot of time around a friend's house when he got one.

My very first home games machine did feature Invaders though. The long forgotten "Acetronic MPU 1000" was actually my uncle's and I used to 'borrow' it for extended periods of time until it ended up a permanent fixture at home. It was probably one of the quirkiest consoles ever, certainly no competitor to the Atari VCS but did actually have a ton of interesting games. As well as Invaders there were the inevitable sports title, and probably the first fighting game I ever remember playing, a blocky plodding version of boxing which offered up the thrills and spills of Queensbury rules, controlled with a game controlled that looked more like the bastard child of a pocket calculator and an old-style analogue joystick. 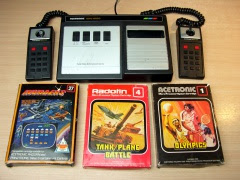 This thing was hilariously underpowered. Games had to be rammed into 2K of cartridge memory, and had to be 'loaded' into the machine by pressing a button twice until you heard a rather satisfying white noise "Bang bang" noise. I kid you not.

But the three titles shown here (Invaders, Tank Plane Battle and Olympics - sadly no boxing!) were time sinks the like of which I'd never known before and were also the first introduction to games that were designed to be played 'head to head' with a willing or unwilling family member.

As the 1970s drew to a close, these early skirmishes with gaming cemented my addiction but this was nothing compared to what the next decade would be like. Tune in next week for part 2 when I figuratively don a pair of espadrilles, wear a t shirt under a suit jacket, plop on a pair of plastic fake ray-bans and examine how much better (or worse depending on your point of view) things got gaming wise in the 1980s! 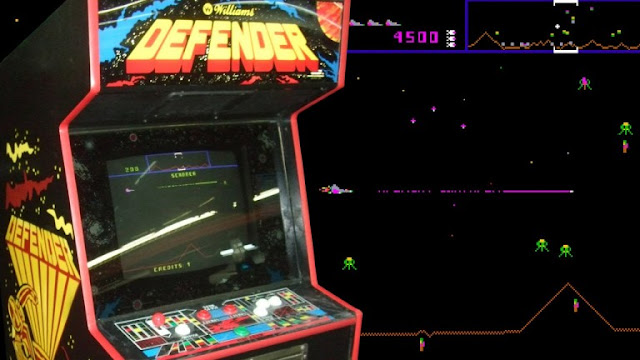 The sad death of the arcade...

I was just a little older than my daughter when I first started taking the coach to London every few weeks on a saturday. There were lots of reasons to go - back in the days when Oxford Street hosted the mightiest music stores (a colossal HMV, a couple of Virgin Megastores - and down the back streets the sort of indie music stores where staff would routinely scoff at your prospective purchases before ringing them up on the till).  The other draw other than filling my shelves with music was that London was one of the few 'travel-able' places I could get to that had real and actual amusement arcades.  Again, like the indie record shops these were usually tucked down back-streets, were usually universally seedy-looking places and jogging my memory about them and how old I was (and how possibly STUPID I was to wander in there as a teen with a pocket full of change to pump into my favourite machines), I can't imagine letting my own kid do the same.  Every year we also had St G 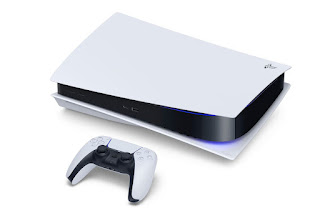 A while ago I wrote a series of articles talking about a lifelong love of videogames, and how through the last few decades I've definitely had my ups and downs with consoles, PCs and handheld gaming units. In the last article I talked about what it would be like in the 2020s, exciting times ahead with the advent of new Xboxes, and the Playstation 5. Of course, that was a couple of years ago - before the UK effectively cut off its own nose to spite its face with Brexit, and COVID and a massive worldwide semiconductor shortage (as well as worldwide supply chain issues) pretty much ruined anyone's chances of buying a PS5 - even a year after its release.  I really don't want to hear those stories of "Oh yarse, I got mine SOOOO easily dude, you're just not even trying". The truth is you're right, I'm definitely not even trying - not with the passion and excitement I did when I queued up to try and bag a Nintendo Wii at a Toys R Us midnight launch, or how 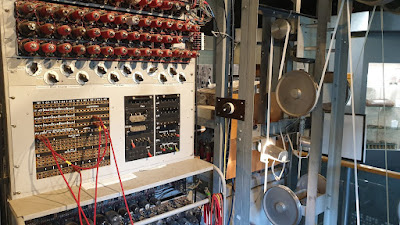 A grand day out at the National Museum of Computing, Bletchley Park and the Milton Keynes Museum, MK

Where do geeks go when they have a rare weekend off and fancy a day out? Why they go to places like the National Museum of Computing at Bletchley Park, a rather understated collection of buildings on the old Bletchley Park site, just a stones-throw away from where all the amazing codebreaking work of the 2nd World War went on.  Though most folk gravitate to the aforementioned 'proper' exhibition, Site H hosts the TNMOC (as it's more widely known) and has replicas of the Colossus codebreaking behemoth, as well as several other large scale first generation computers either directly linked to the super-secret codebreaking stuff, or later large scale computers developed for educational or commercial purposes.  Good museums are only as good as the exhibits and the staff there, and in the case of TNMOC both were excellent, with super-engaging staff who talked at length about Colossus and the later Witch Generation 1 computer, the first of its kind to feature most of the modern